Residents of our Meetinghouse Village campus in Kittery, Maine, recently completed an intriguing inter-generational program called Sages and Seekers with sophomores from the local high school. Part of a national initiative, Sages and Seekers pairs residents of senior communities with a high school student who has volunteered for a weekly session of sharing life experiences through conversation.

The stated purpose of the program is “to combat social isolation and age-related segregation within communities, while meeting the universal and compelling need of young adults and elders to share and understand their lives.” 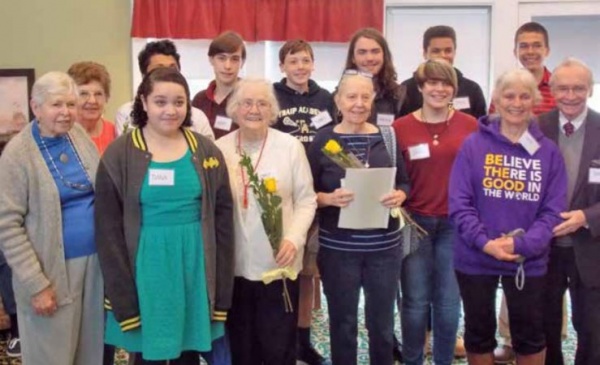 Four of our residents conducted the 8-week program, which concluded with a commencement ceremony of sorts on the Meetinghouse campus in May. At that event, students, educators and other residents listened to Seekers as they read a tribute they wrote to their Sage. The exercise provides students with the opportunity for public speaking, and provides the Sage with the opportunity to be honored.

The program was a great success according to our residents. Typically, the opportunity to explore in depth the lives and generational sub-cultures of widely separated age groups is not available in the course of daily life. Neither would bonds of friendship typically form between such age groups. Both of these benefits blossomed during the 8-week session, as testified by Sages and Seekers alike during the commencement. We look forward to the same next year!

“ We had our name in at other places and had driven by Meetinghouse Village many times before we came to see it. We loved it immediately. Everyone was pleasant and kind. We moved in right away. People in our building are nice to be with and check on each other to make sure we're OK. We are happy to be here. ”