An important staff change took place at Meetinghouse Village in September. Rev. Bob Hett, chaplain since 2012, retired from his post, and Rev. George Middleton of Massena, NY assumed the chaplaincy. 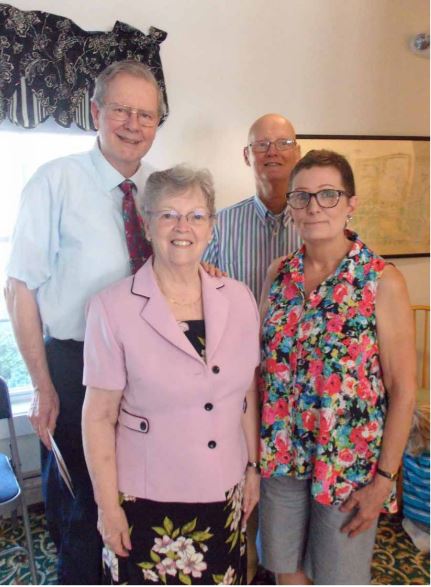 Bob and Donna Hett with George and Leslie Middleton at the “transition” reception in September.

Both men are seasoned pastors in the Advent Christian denomination. Bob has served in a pastoral role since 1962 as a student clergy in college, and then for 50+ years in thirteen pastorates around the United States. His ministry has also included radio broadcasts, evangelism, music ministry and even chaplaincy with two minor league baseball teams. He received special recognition at the denomination’s 2014 national convention for surpassing 50 years of service – a distinction earned by only a small handful of other AC clergy.

George served four years in the Navy, stationed mainly in the Philippines. Following his service he obtained a degree from Moody Bible Institute. After serving as a volunteer to children in the Melrose, MA church, he eventually was ordained to the ministry and carried out his pastoral career in Danville, Quebec; Crouseville, Maine; and Massena, NY since 1994.

Having a full-time in-house Chaplain is somewhat unusual for a retirement community the size of Meetinghouse, but our historic denominational ties and our commitment to serve seniors in Christ’s name marks us distinctively anyway.

Bob and his wife Donna have enriched our life at Meetinghouse, and they will continue as residents. We also look forward to the next phase in our life as a community with George and his wife Leslie joining us. Above all, we’re thankful for faithful servants who have brought the unique touch of their ministry to our campuses throughout the years.

“ We had our name in at other places and had driven by Meetinghouse Village many times before we came to see it. We loved it immediately. Everyone was pleasant and kind. We moved in right away. People in our building are nice to be with and check on each other to make sure we're OK. We are happy to be here. ”